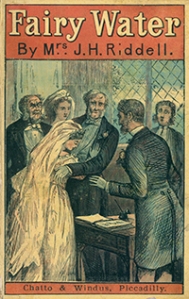 Yellowbacks were eye-catching, cheap, popular reading among rail travelers during the mid-nineteenth century.

The Athenaeum of Philadelphia is showcasing some two dozen of these distinctive British books in a special exhibit Yellowbacks: Don’t Judge These Victorian Books by Their Covers at its gallery at 219 South 6th Street through the month of March.

Free noon-time public tours of the exhibit are available on Thursday, March 19 and again on Monday, March 30, 2015. Executive Director Sandra Tatman will talk about the library’s well-preserved collection of some 100 yellowback titles plus provide colorful history about this early pulp literature. No reservations necessary.

The years between 1855 and 1879 are considered the “golden age” of yellowbacks. Well-known artists often illustrated the luridly inviting front covers, while commercial advertisements for popular products, like Pears’ Soap, graced the back covers. Many yellow backs were reprints of popular fiction by best-selling authors of the day such as Charles Dickens, Wilkie Collins and Anthony Trollope. American authors like Mark Twain, Harriet Beecher Stowe and Bret Harte were also published.

Once inexpensively mass produced and sold for pennies at railway stations throughout Britain, yellowbacks in good condition today are hard to find and highly valued by collectors. Indeed, go online, for a number of book seller and literary websites provide wonderful details about the authors and publishers of the era. Emory University, with one of the largest collections of yellowbacks, has digitized some 1200 rare editions and made them available for free downloading.

For more information about the exhibit, contact the Athenaeum of Philadelphia at 215-925-2688 www.philaathenaeum.org.